Whether it’s being kept caged in zoos and marine parks and / or forced to perform in circuses, rodeos and races, wild animals were never meant to serve as a source of entertainment for humans.

In any of these scenarios, elephants, tigers, bears, lions, zebras, monkeys, dolphins, whales, bulls, horses, dogs and other animals are often taken from their mothers at young ages and sold into a life of captive existence. Their natural needs are denied, and they are forced to spend the majority of their shortened lives in small, dark cages when they aren’t being physically abused and tortured in order to perform as commanded.

Wild animals are not domesticated to co-exist in a symbiotic relationship with people; they will not readily volunteer to please people by performing meaningless, repetitive routines in large noisy arenas. 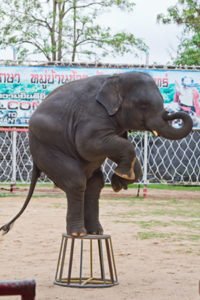 Despite claims to the contrary, trainers usually use excessive and abusive training methods to establish and maintain the control that is necessary to force wild and exotic animals to perform the tricks that they do during circus acts. Animals such as elephants are trained using the most extreme and brutal methods including electric shocks, starvation and beatings.

Regardless of training, wild and exotic animals behave instinctively and often unpredictably. After years of abuse, elephants will sometimes go berserk, rampaging and killing their handlers or spectators. Therefore, wild animals, trainers, and spectators are all subjected to unnecessary and substantial safety risks when wild or exotic animals are forced to perform unnatural tricks repeatedly. 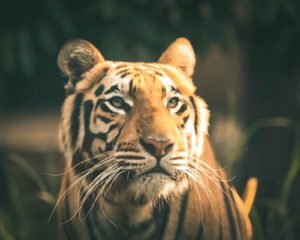 Animals used in circuses and other traveling exhibits are routinely subjected to months on the road confined in small, barren enclosures without regard for temperature or comfort. It is not uncommon for them to spend up to ninety-five percent of their lives under these conditions. The animals are often deprived of food and / or water during travel and before performances. They are routinely chained the majority of the time with no chance to exercise, socialize with other animals, or express the range of behaviors that are natural for them. With few exceptions they are provided with limited and inconsistent veterinary care. 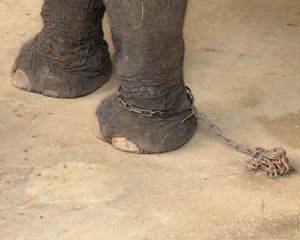 In 2017, Ringling Brothers and Barnum and Bailey Circus closed its business. Thankfully, a growing number of cities are banning or restricting the use of animals in circuses as public demand for animal-free entertainment increases.

Hundreds of animals are injured or killed every year in rodeos throughout the United States.

Incredibly, rodeo people have no problem with committing an act of cruelty and cowardice against a baby cow who is only three to four months old. 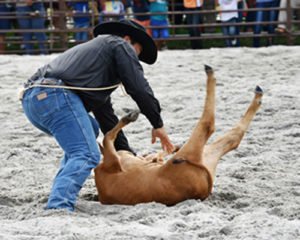 For the calf roping event, calves are shocked with electric prods to force them to run out of chutes at high speeds. It is not hard for anyone with a brain and a heart to understand what is wrong with roping a baby animal, body slamming it to the ground and tying it legs so it cannot move. The force of stopping breaks necks, killing or injuring many calves each year.

The rodeo bucking horse is not wild. In a reversal of western history, domesticated horses are made to act wild by irritation, discomfort and pain. Bucking broncos and bulls only buck to rid themselves of the painfully tight straps cinched across their stomachs, near the genitals. 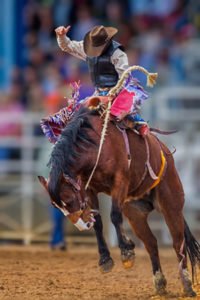 Rodeo horses often refuse to buck even when they are spurred and have the flank strap on. It is called “chute stalling,” and it usually results in a 5000-volt dose of pain from a shock device for the “guilty” bucking horse. The horse who simply refuses to buck is headed for the slaughterhouse.

And rodeos know they can fool many people into believing that a bull is impervious to pain when nothing could be further from the truth. Typically, it is bulls who receive the worst abuse from electric shocking in rodeos. Cows are particularly sensitive to electricity, and rodeo animal abusers use that to their advantage to make calm, docile bulls appear to be wild killers.

Veterinarians are not required to be present at most rodeos to help injured or dying animals.

Animals confined in zoos spend their entire lives without their physical, emotional, social, and mental needs being adequately met. 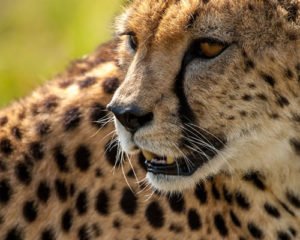 Animals are often sold to zoos after being captured in the wild as babies and taken from their mothers and families. In the wild, many animals will roam hundreds of miles – something they obviously cannot do when they are stuck in small cages and enclosures. 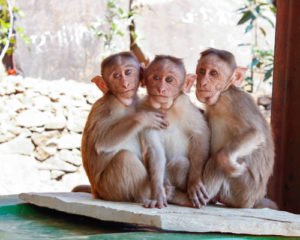 This inability to pursue their natural instincts and lives along with the boredom, abuse and loneliness they experience while trapped in zoos causes many animals to exhibit characteristics such as endless pacing, rocking, swaying, and / or self-mutilation as a result. Most do not make it past half of their normal lifespan in the wild. 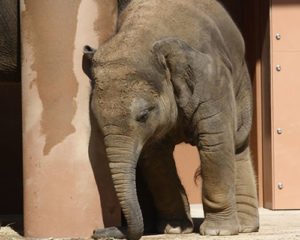 And should the zoo experience a natural disaster or lack of operational funds for any reason, the animals are often abandoned or neglected as a result. Some older animals are sold to organizations for canned hunts, the ultimate insult added to injury for animals who spent their lives in confinement in order to entertain humans.

Killer whales, or orcas, are members of the dolphin family and are the largest animals ever held in confinement. 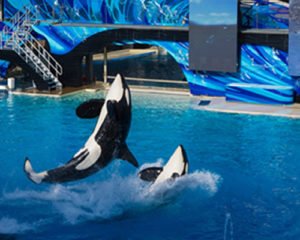 In the wild, orcas stay with their mothers for life. Family groups or “pods” consist of a mother, her adult sons, and daughters, and the offspring of her daughters. These highly social animals experience great trauma when they are ripped from their families and put in the strange artificial world of a marine park.

Dolphins swim together in family pods of three to ten individuals or tribes of hundreds. Capturing even one wild orca or dolphin disrupts the entire pod. Orcas and dolphins who survive this ordeal sometimes try to save their captured companions. 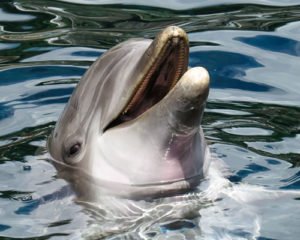 Dolphins navigate by echolocation; they bounce sonar waves off other objects to determine shape, density, distance and location. In tanks, the reverberations from the own sonar bouncing off walls drives some dolphins insane. 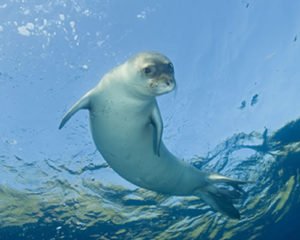 Captured dolphins, seals and orcas are also forced to learn tricks. Former trainers say that withholding food and isolating animals who refuse to perform are two common training methods. Since they are highly social, the stress of punishment by isolation from other dolphins is so great that some commit suicide. 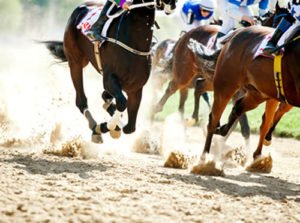 Due to neglect, abuse and injury, animals raised and forced to race expire way before their natural lifespans. After being drugged, whipped and pushed beyond their limits, dogs and horses are often discarded / killed once they are no longer deemed “winners” by their owners. 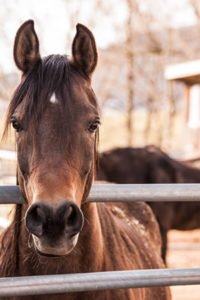 And thanks to over-breeding, the horse racing industry sends an estimated 10,000 horses to slaughter annually, or approximately half of the 20,000 new foals born every year.

Recently, the death of over 20 horses within a short timeframe at the Santa Anita, California, race track led to a ban on the use of medication and whips on racing days. 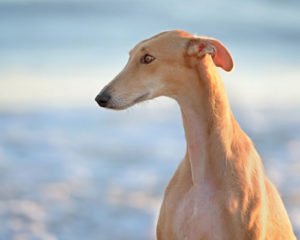 Despite the fact that several dog tracks have permanently closed in Oregon, Connecticut, Kansas, Wisconsin and Florida – and the sport is now illegal in all but five U.S. states (Alabama, Arkansas, Iowa, Texas and West Virginia) – thousands of greyhounds are still killed every year in the name of selective breeding or due to permanent racing injuries. 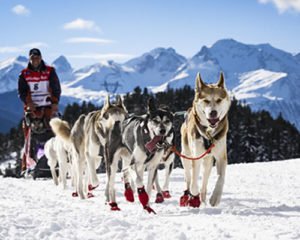 And for the dogs forced to race in the Iditarod, death is a very common outcome; dog owners will cull or kill any surplus dogs or those who are not strong enough to endure the grueling sled race. As many as half of the dogs never finish the race due to injury, illness, exhaustion or death.

Whether in the form of bullfighting (now banned in many Spanish and Mexican towns), illegal cock and dog fighting, children / carriage rides, or television and film, animals forced to participate any form of entertainment for humans always suffer. 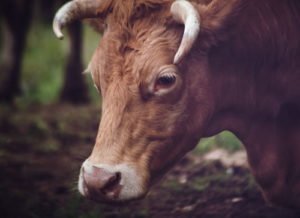 Bulls in bullfighting are first tortured by stabbing until finally killed. Dogs and roosters raised to fight always end in serious injuries and/or death. Ponies and other animals kept to provide rides to humans are often abused by not being allowed to eat or drink as they walk around in endless circles for hours on end. Animals in petting zoos are subjected to rough handling or worse. And animals used in the film industry are often beaten in order to force them to perform on cue. Horse-drawn carriage rides often end in injury or death for the horses forced to endure the stress of vehicle traffic, extreme weather conditions, pavement, pollution and the physical strain of pulling a carriage and its occupants.

Thankfully, as more people are educated and made aware of the abuse animals in entertainment endure, many of these types of activities are now banned / illegal, while others are more closely supervised and managed with the animals’ needs in mind. 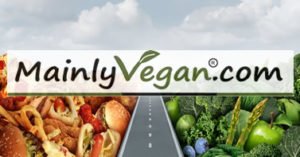 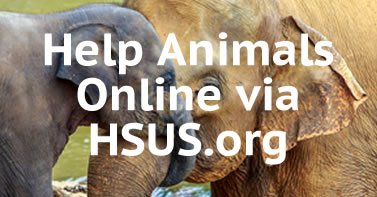 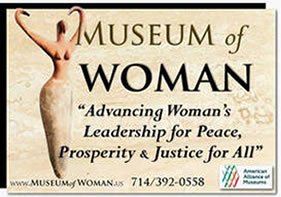